Sorry this post is long overdue. Just moved from the East Coast to the West Coast.  Which gives me plenty of time to work at PAX again. I was hoping to get a badge this time around instead of working it but they sold out on me AGAIN!!!! So looks like I will be working it. I’m curious how much bigger it will be than  PAX east.

So far in the Seattle I’m noticing tons of game tester opportunities that are available here opposed to Boston. Game testing has been something that I’ve always wanted to try. I guess when in Rome right?

Since I’ve moved I just got the Playstations set up. Sadly I had to leave everything else behind for now. I was going through my downloaded games and noticed Apotheon.

I will always be into platformers. Since the days of the 8-bit NES they will always have a special place in my heart. I’m delighted that platform games are still being designed even though they seem somewhat simplistic to their counterparts.  I am a fan of this game! I just love anything having to do with ancient Greece or Rome.  The controls are a bit wonky at times which can be frustrating. I mean wonky like and old school flash game. Anybody else ever play online flash games??? It’s just like sometimes it works the way it’s supposed sometimes it doesn’t. But other than that the story is fun. I love how the objectives are displayed and you have a choice of completing whatever mission first. My most favorite thing about this game was the artistic design. With my art history days long passed I still remember traversing the Museum of Fine Arts looking at greek amphoras while my professor drones on in his monotone voice. The stories on them are quite interesting. A few of them showing drunken orgies or battles. 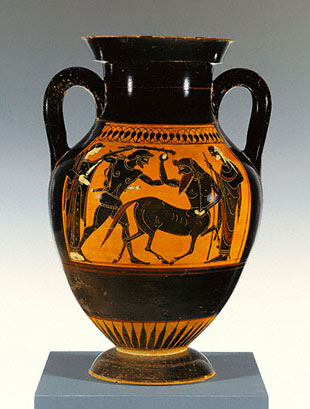 Most of them were designed either using black figure or red figure.  The game is designed using the black figure theme. It looks like this game jumped right off an ancient vase.

So if you’re into platforms give this one a try. The controls are a bit wonky but if you stick with it you’ll be glad you did!